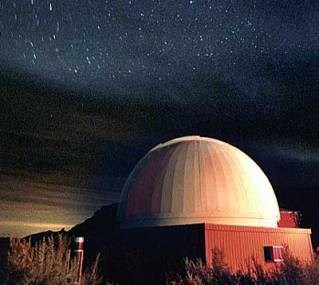 Did you know that New Mexico was one of the first states in the U.S. with a law that protects our night skies? Did you know that Travel & Leisure named New Mexico one of the world’s Top 10 stargazing spots? Are you ready to be an astrotourist? Come to the Land of Enchantment and experience an ancient and authentic adventure, where we celebrate our dark skies and relish the starlight. Our high elevations, low population densities, dry climate, clean air, and number of clear nights make for an excellent stargazing adventure.
New Mexico is home to Gold and Silver-Tier Dark Sky Parks, as certified by the International Dark Sky Association.

Capulin Volcano National Monument
Little can rival the beauty of the night sky. As a Gold-Tier International Dark Sky Association (IDA) Park, Capulin Volcano boasts one of the best in New Mexico. Star Parties are held April through September at the base of the Volcano and occasionally on the Volcano Rim. Interpretive park rangers give brief talks about the night sky and any astronomical events underway. All equipment needed is provided by the park. Information about Star Parties and other events can be found on its website: https://www.nps.gov/cavo/index.htm

Clayton Lake State Park
Designated as New Mexico’s first dark sky park in 2010, Clayton Lake State Park is a Gold level International Dark Sky Park and has its own 14-inch Mead telescope. While waiting for the stars to come out at night, be sure to check out the dinosaur tracks near the lake spillway, including some of the most well-preserved trail drags anywhere in the U.S.! Visit their website:  http://www.emnrd.state.nm.us/SPD/claytonlakestatepark.html

Chaco Culture National Historical Park
In 2013, Chaco Culture National Historical Park was designated an International Dark Sky Park by the International Dark Sky Association, further enhancing the canyon’s place as a location where deep sky viewing is available. The observatory’s several scopes are then turned skyward to view what has made Chaco a haven for amateur astronomers and anyone who wants to connect to this celestial cultural resource. Visit their website: https://www.nps.gov/chcu/index.htm

Salinas Pueblo Missions National Monument protects four of the best-preserved 17th century Spanish mission churches in the continental United States of America. The Monument is located in the Estancia basin, which is a bowl flanked by mountains and mesas. Visit their website: https://www.nps.gov/sapu/index.htm

Arrive in daylight for a 360-degree view of the setting sun. As darkness falls, planets and stars emerge. Complete darkness finds the Milky Way crowning the mountains of the Gila Wilderness, as well as the faint glow of distant galaxies and zodiacal light. Cosmic Campground has a hard-surface observing area with four pads for telescopes, no artificial light for nearly 25 miles in any direction, and an exceptionally dark sky. http://bit.ly/CosmicCampground