Waltzing With Rattlesnakes by Thor Sigstedt 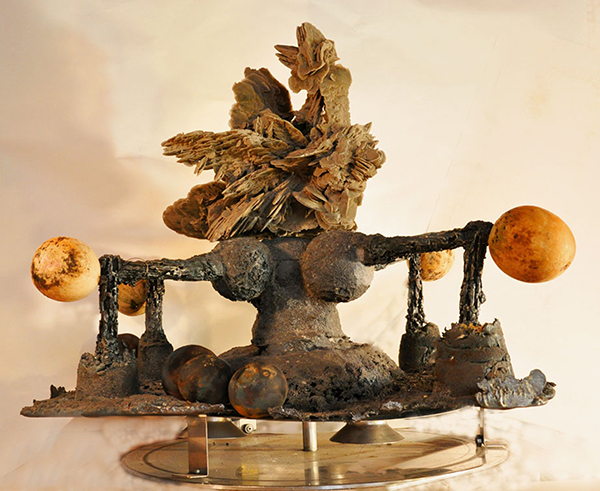 I heard thunder on the mesa when I left.  The road was dirt and stone; I had to be mindful, unlike when on asphalt, mostly; of the terrain; don’t splash into the potholes, just making them bigger; go where its flatter and more solid.  The eyes are the tool for the job, just as they are as we navigate the night sky on the cosmic road of the stars and constellations or ponder that light down on the desert floor as we look out the porthole of the jet we are on, like I did recently, when it occurred to me that the light is not a ‘ray’ or a straight line, but, somehow, everyone, from every vantage point, can and does ‘see’ that same light down there as if it were a beam, but it can’t be quite that way, cause ‘rays’, like lasers,  get wider apart from each other as they travel through the space and then not everyone could see the light, so now curiosity sets in!  Some things just drive me interested, like wondering about that moment when the leaf separates from the tree and begins its adventurous descent, wafting up into the air; flying like an eagle in an updraft and then, finally, comes down, only to begin another iteration, perhaps floating in a flash flood then somehow coming to rest on a stone in the creek, basking, water rushing by, waiting patiently for the next adventure.  The light has to detach from the high energy source and then what is really happening? The textbooks show a tree out there and then a tree in our eyes and then it is upside down in the back of our brains and then our brains turn it back right side up. This is over-simplified and complex, to me.

All so-called electromagnetic radiation is light, but we just see a small portion of this radiation called ‘visible’. Cone-shaped cells in our eyes are receivers tuned to the wavelengths in this narrow band of the spectrum, the amazing qualities of light and quantum characteristics startle the mind; what with protons materializing, quantum-style, as the lit images reach our liquid-based eyes (which we share with the rattlesnake and not a bug). The scientists appear to prefer to avoid talking and picturing too much about the ‘spherical’ nature of the waves that emanate from the lit objects, being ushered along by said ‘fields’, pulsing as both electrical waves and electromagnetic waves which are at ‘right angles to each other’ and doing little twists to boot; the colors being the reflected-back-to-us in specialized wavelengths arriving in a cornucopia of spherical waves.  What happens is almost unbelievable, a riot of activity and color and shapes which are also pulsing from a different angle to our neighbors and friends who are in line of sight.  Light waves most often bounce off of walls and go no further if hindered, so they need a clear shot to our eyeballs.  And these light waves do not seem to bother each other as they zip along at the speed of light, of course.

The road below the mesa unfolds in front of us with the same forces at work, creating challenges for us to be involved in, sometimes augmented by a road runner, or that artful dodger, a loquacious chat or a deer zipping across or a stunning fiery sunset and/or booming cumulous clouds vying for our attention as we navigate the real world; at night, at road’s end, we gaze up at the ‘stars’.

We all chat about going into the woods; into the natural world, across the fields, along the creek, up the

saddle or switchback trail and talk about how it is ‘healing’, ‘special’, ‘uplifting’, ‘inspiring’ and, somehow, ‘spiritually rewarding’, except some of us who think that ‘nature is for the birds’,  yet we do not often describe what is so amazing and how and why it is, so the generalities sort of dilute the recounting and beg the question of what is really going on.

I often ‘trompse’ the ‘land’ and, the other day, I went downstream, under the huge steel bridges and, picking my way through thickets, jumping from stone to stone to cross the water, stopping to harvest some young green watercress, taking photographs and videos right and left of the iconic cottonwood tree, the eternal swirl created by the water-carved granite outcrop, the crag in the last light of the slowly setting sun, the gorge and its towering faces of fractured hard stone, the course of the water, searching a good shot of the ravens, of the moon to the east, of the tall cowboy-style ponderosas and of a fallen leaf on an Apache Plume.  I am delighted with the excitement of all this and…. then….it hit me that I had a glimpse into what and how and why we do all this reveling about being outdoors.  It is because, at least in my mind’s eye and in my eye’s mind, I am really like a video camera and a still camera, but non-stop and very alive and why I am so uplifted and involved is because; no matter where I look under the blue blue sky I am seeing a continuous ‘teemingness’ of aesthetic imagery, each glance, each shot is a masterpiece of design; the way the leaves fell onto the stones, the textures of silt, sand, stone, water, the aesthetics are non-stop and each minute glance is a stunning study of design, actually….natural design that is born of chaos and has somehow self-organized into this movie that is being made in my mind, through my eyes and with the cooperation of my body; breathing and straining to stay stable in this uneven paradise of imagery.  It is, in the end, about aesthetics and the satisfaction of having our being filled to the brim with aesthetically pleasing, stimulating, frame by frame, moment by moment, thought upon thought impressions…. that are looking, in so many different ways, slants, styles and dimensions; that are looking at what can start to be described as a stunning work of art, with the brush strokes so realistic and stylized and causing the eye to wildly glance here and there……for more….for more depth…..for more of the unfolding colors, tones, lighting, stonework, gardens….well….it is so much to see that it becomes  visual enigmas that are wrapped in endless ‘studies’ of form, function, style…..and much, much more.  The point is that I was able to glimpse the dynamics that make this so special and my mind notes that everything flows almost seamlessly into each other or punctuates the scene with vitality, like a hawk beginning feathery flight at eye level a few feet away as I stood on the escarpment top next to the tree it was perched on; the susurrus sound of slow moving water or the way the tiniest freckle on the tiniest pebble or leaf or stick or stem seems to be all part of the ‘film’ that I am ‘seeing’ unfold before and though me; the electromagnetic impulses which bounce and the sound waves, which can travel through objects, create visions during the day and sleeping under the stars is sometimes rewarded by exceptional crystal clarity of the ‘heavens’, like I once experienced on the side of San Antonio Mountain near Tres Piedras, where the air was pristine and without ‘light pollution’.

I am thankful to get some insight into these, albeit aesthetic musings…. get a chance to elucidate the nature experience.  The difference in much of the human built environment is that the lines are often straight, the corners and tones are designed to be mostly monolithic; there is a sense of limitation and often a lack of timelessness and integration and more a sense of ‘ticky-tacky’.  No offense to the builders, such as myself, and more nods to the natural world as it struggles along it’s infinitude.  Just imagine trying to make even one little stone or leaf from scratch and create a light wave or an eyeball; would have to charge a trillion dollars and take billions of years to make it!